Home » Where I have been » France » Père Lachaise

This could sound a little weird, but i really like cemeteries.

I look at the Cemetery as a park where you can take a walk through the history.

I live in a city in Croatia that has one of the most beautiful Cemetery in Europe.

wondering who were the people who are resting here now.

So when we were planning what to see in Paris, on my list had to be Cemetery Pere Lachaise .

Pere Lachaise is the largest Cemetery in Paris. There are the graves of many famous people.

It’s good to have a map of the cemetery because it’s big and if you want to find some specific monuments it’s better to have one.

Honoré de Balzac is one of the famous people who have they monument at Pere Lachaise.

He was a French novelist famous by short stories and novels „La Comedie humaine”.

There is also a grave of Jim Morrison – singer of The Doors – it is one of the city’s most visited tourist attractions.

Very interesting monument is one of the Victor Noir. Victor was a french journalist who is famous for the manner of his death.

His tomb is a fertility symbol. It is a life-sized bronze statue. Myth says that placing a flower in the upturned top hat after kissing the statue on the lips

and rubbing its genital area will enhance fertility.

And there is also a tomb of Oscar Wilde – writer and poet.

I remember when I was 12 years old I’ve got his book of short stories for my birthday.

„The Nightingale and the Rose” was then and still is the saddest story I’ve ever read . And my favorite.

The tomb was covered with kisses left there by admirers.

In 2011, the tomb was cleaned of the many lipstick marks, and a glass barrier was installed to prevent further damage.

Walking through the Cemetery you can also see many other beautiful monuments.

It is really a remarkable place. 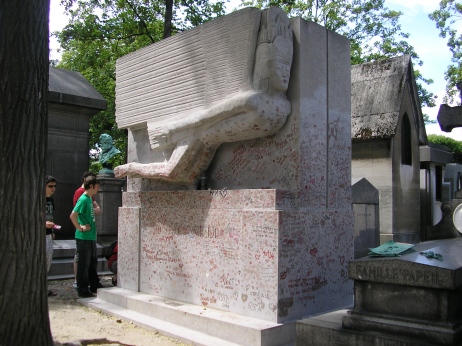 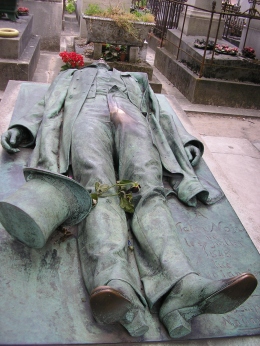 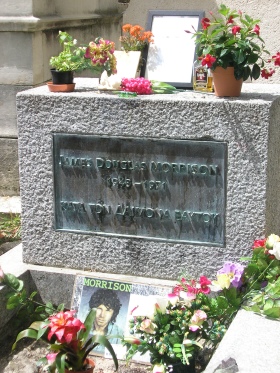